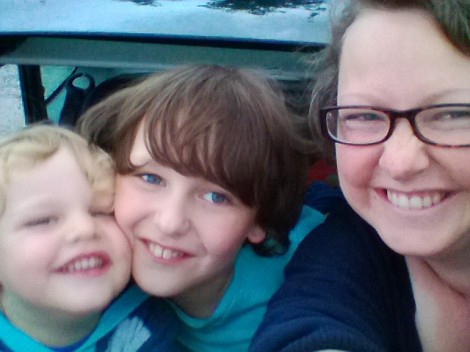 Recently, I was interviewed about home ed for a magazine and the journalist mentioned that everything I’d said was positive and asked if, for balance, I could tell her about any downsides. I told her I’ve been trying to blog about that for ages and not coming up with anything. I started a post last week about how the children are constantly nagging me for food… but that was all I had, so I deleted it. I asked Harry and he said “Nothing.” I asked David and he said, “I don’t know. Probably being with the kids all the time?”

Yes. This. Sort of. Although not really.

I think that when children are in school, parents tend to leave some things to the school. Or blame the school for stuff. Delegate a bit of the parenting. I did it a lot. Harry wasn’t reading well? Because of the crappy reading scheme the school sent home. His writing’s a bit rubbish? Because of the Year 1 teacher who told him not to worry about letter formation, that it would improve in time, but it hasn’t. It was easier for me to blame the school for stuff because me being (along with David) 100% responsible for the boys? Way too scary.

Not long after we took Harry out of school, I had a huge row with my mother-in-law (who sadly died last month). She asked if I was planning to home ed Joe too and when I said yes, she said she didn’t think I was capable, “mentally.” You probably won’t be surprised to hear that I didn’t take this particularly well. But I’ve thought of it a lot lately because Joe can be an almighty pain in the arse. He says “I hate you”, he calls me an idiot (or a “stupid bottom”), he sometimes hits, sometimes spits; he’s completely hilarious and adorable, but he knows how to wind me right up. And sometimes I don’t feel capable “mentally.”

But often his worst behaviour comes out of me being distracted. I’m trying to get work done and I’m telling him to hang on, I’ll be there in a minute. Or I’m not listening properly and “hmm-hmmm-ing” him, but he knows I’m not really present and it makes him FURIOUS (just as furious as it makes me when David does it to me, funnily enough). The other day, we were in a shop and Joe came over and asked me if he could have some sweets. I said yes, but I wasn’t really paying attention (if you must know, I was trying to choose a Krispy Kreme donut for myself). Joe said, “Yay! Pick’n’mix!” and I said, “Oh no, sorry. Not pick’n’mix.” Total meltdown. Totally my fault.

And that’s good, of course. It just feels like a lot of responsibility. But it should be my responsibility. Because they’re my children. My gorgeous, irritating, ever-present children. And I feel incredibly lucky that I can be with them all the time. And then, when David gets home, I pour myself a glass of wine.

8 responses to “Is there a downside to home education?”